By Kaajzr,
December 12, 2020 in General Discussions

That's just the thing though.  I didn't support this game to become "game rich".  I joined to make friends, build, craft and work towards a common goal with my org mates.  But now this game is nothing 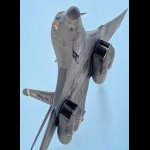 I should start off by saying, this is specifically for the devs & NQ. I'm not trolling anyone on the thread, nor demeaning anyone else.   I have tried defending most of the updates, even

Illusion of content.   Before many felt like they had nothing to do  - they had a factory that could produce everything and they just needed to sink in hours mining to throw in the ore to ge