By FrozenFace,
November 30, 2016 in Off Topic Discussions 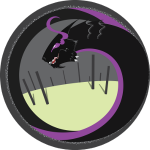 Um, I'm surprised no one is talking of the FTL OST by Ben Prunty https://benprunty.bandcamp.com/album/ftl