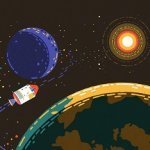 By Astronaut,
October 11, 2016 in General Discussions

Hello fellow Arkship passengers    I found out this official Artwork at Dual Universe page on IndieDB a few days ago and this thing blow up my mind  That will be awesome if we can be a Hunter, hu

I really hope they add in "savage" planets later on. Planets where they environment is toxic, the weather harsh and the wildlife is lethal. Not every planet, but a planet or two in every system. They

Ohh god that Taming will be pretty awesome. It's cool if we can make friends with some ... let's says "Space Horse" and they can give us a free ride as feedback    Thats okay if Dev's not add it i