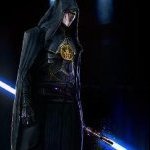 The Solar Empire, The Beginning Part 1

By EmperorToch, September 4, 2016 in Novark Agora